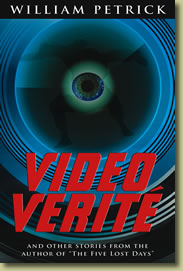 VIDEO VERITE AND OTHER STORIES

In our media-saturated world, the line between reality and fiction has grown thinner and more confusing. With sharp, clear prose and an insider’s view of the media, Petrick’s stories take us into a hall of mirrors where men and women struggle to understand themselves and their relationships with one another. In a climate defined by images, does love stand a chance when no one is certain what is real? In the title story, an accomplished skydiver goes airborne with a video camera to capture the love of his life, but a small oversight upends his best intentions. In “Sins of the Father,” a man arriving in Huntsville, Texas to commute his son’s death sentence clashes with a documentary producer intent on chasing the story to its bitter end. In “Telling Time,” a corporate video producer, conflicted by his own immoral conduct, learns that sometimes the absolute truth is the most effective lie.

The Reviews Are In!

“I have to refer to the first story since it haunts me still. In Video Verite, Ron an avid videographer volunteers to video tape the actual footage of a skydive jump organized by his friends. Completely engrossed in his meticulous task of catching the essence of the jump, he omits to put on his parachute. I won’t say anymore since the following scenes created by Petrick has you glued and gripped with eyes widening as Ron spirals downwards. WOW…what a beginning and the rest that follows focuses on relationships with an accuracy that will prove chilling for the sublime realities of life. I still get the “heebee jeebies” at the thought of the first story. William Petrick is a name to look out for and get ready…he definitely has a story to tell.” – PK Reeves – Aisle B Reviews: Read full review here

“These twelve short pieces truly pack a whollop. Mr. Petrick has a great talent for imbuing the mundane with an edge that is at once subtle yet overwhelmingly disturbing.” – blogcritics.org: Read full review here

“I’d never heard of William Petrick before this collection, but I’m glad he came to my attention. These intelligent, forthright, unsentimental stories gave me plenty to think and feel about.” – Kevin L. Nenstiel, “omnivore”: Read full review here

“Some of the greatest short story writers such as Proulx, Updike, Palahniuk, Salinger Asimov and Bradbury had to start somewhere. This collection of fine stories by William Petrick suggests he may be headed in the right direction.Watch him, read him.” – Grady Harp: Read full review here

Author, VIDEO VERITE AND OTHER STORIES