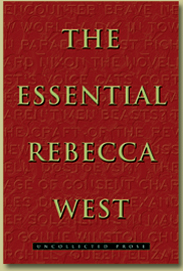 Take a short trip through the mind of one of the most entertainingly bright writers of the 20th century. This selection of previously uncollected prose by Rebecca West, with its dazzling show of verbal and philosophical mastery, shows why West is still the secret weapon of newspaper editors, intellectuals and raconteurs the world over. Wielding a pen that&#39;s as savage as it is brilliant, in these pages West has something genuinely original to say about love, war, pride and politics. Her insights throw new light onto great literary and political figures such as Aldous Huxley, Bertrand Russell, Winston Churchill and Richard Nixon. She thrashes a new path through the thorny thicket of feminism. She takes you on a truly bizarre excursion to wartime London. She even has something surprising and memorable to say about cats. In all, this wide-ranging, eclectic collection from a woman who has been called the finest of her generation is pretty much guaranteed to make you feel and sound smarter.

Rebecca West was a London-born journalist, novelist, reviewer and essayist who brought a powerful feminist voice to the 20th century. Her greatest work, “Black Lamb and Grey Falcon,” an investigation into the nature of war and history structured around a tour of pre-War Yugoslavia, was listed among the most significant books of the 20th century. Time hailed her as “the world’s number one woman writer,” and she was made Dame of the British Empire in 1959. Several of her novels have been adapted for film, TV and radio, including “The Return of the Soldier,” “The Birds Fall Down,” and “The Fountain Overflows.” Her powerful journalism skills made her the writer New Yorker editor Harold Ross trusted to cover the Nuremberg Trials of Nazi war criminals.