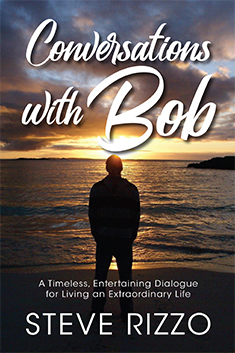 We currently live in the United States of Entertainment, where the attention span of the average reader is minimal. Steve Rizzo has intuitively crafted an insightful book that strikes a balance between truth, humor and engaging narrative. Welcome to Conversations with Bob, starring Bob and Bernie. Who are they? Simply put…Bob is of your Higher Nature, where solutions to problems are revealed. Bernie resides in the Negative Zone, where problems get blown out of proportion and challenges turn into emotional havoc. The conversations between the two will prompt you to start a dialogue between your own Inner Bob and your own Inner Bernie. Bernie’s negative thoughts and limiting beliefs mirror those of many of us, making his specific situations readily identifiable and the solutions to his plight universal. Whoever your Inner Bob is, the trick is to engage in that dialogue rather than listening to the part of you that spews negativity, exploits your deep-rooted fears and toxic beliefs, and traps you in a constant state of turmoil. The most important Life Lesson the author of this book learned is that “you become what you think about, day in and day out.” And when he finally learned how important that phrase was, his life began to transform dramatically for the better. The strategies that Bob offers Bernie will show you how to transform your life from failure to success, from unhappiness to fulfillment, and from lack to abundance. After enjoying the intertwining dialogue in this book, you will recognize opportunities disguised as barriers and employ practical strategies on how to tap into the universal laws that govern our lives. If you’ve had enough struggles, if your life is lacking in some meaningful way, on any level, continue reading, my friend.

You can’t attend one of Steve Rizzo’s keynote speeches or seminars or read his books and leave with the same attitude. He’s a personal development expert, comedian, motivational speaker and bestselling author. He was named a Showtime Comedy All-Star, and his immensely popular PBS special brought him into millions of homes. It’s no surprise that he’s been inducted into the Speaker Hall of Fame, an honor bestowed upon fewer than 232 speakers worldwide since 1977. Steve’s extensive client list includes American Airlines, JP Morgan Chase, AT&T, the CIA (Yeah, that’s right, The Central Intelligence Agency!), Burger King and many more.